Tigerwood is a Marketing Name.

Prior to the founding of TigerDeck LLC in 2001, Tigerwood was used as a marketing name for either Hawaiian Koa (cites listed) or African Lovoa Trichilioides (cites listed). For examples, see the pictures below.

TigerDeck® uses a very common specie, Astronium Spp, a tree that grows from Southern Mexico to Argentina. The success of TigerDeck® quickly motivated importers to buy the specie to sell in the USA. One importer decided to call this specie Tigerwood, and the name has stuck.

Prior to being called Tigerwood, Astronium had been used in the US for many years in cabinetry and, most famously, by Smith and Wesson for their high-quality hand gun grips. These grips were used with the local Spanish name for the specie, Goncallo Alves. 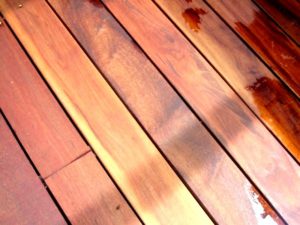 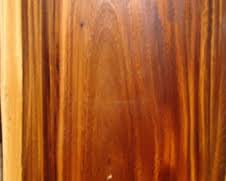 I have counted 21 local names for Astronium Spp, which is in the Cashew family and has 5 subspecies. All 5 subspecies have been used by TigerDeck®, as they share the same vital characteristics for use as an exterior deck board. These characteristics include an oily, resinous cell structure and an incredible resistance to mold, fungus, and insects. In Belize, Tigerwood is known as Jobillo; in Brazil, it is Muiracatiara; in Bolivia, it is Cuta Tigre; and so on with many ‘colorful’ names. A similar and comparable excellent exterior hardwood decking material is Ipe (Hanthroanthus Spp. formerly in Tabebuia genus). Ipe and Tigerwood are both excellent for exterior use in service because they share similar traits, but Ipe is a slow growing “climax” or old growth type specie with very thick cell walls. It is very difficult to kiln dry, but if air dried, it is a very stable exterior deck board. 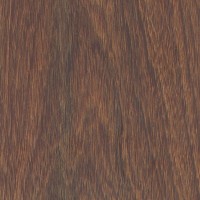 Astronium Spp (Tigerwood) was not historically used for exterior uses because it MUST be kiln dried correctly to be stable. The kiln drying requirement is caused by the nature of the tree. It is a “pioneer” specie to foresters. A pioneer, it is one of the first specie to germinate after fires, wind storms, or slash and burn agriculture, open the forest floor to sunlight. Tigerwood is a very fast growing and short-lived specie, living only about 80-100 years. This speed of growth is reflected in large cells and relatively wide average ring count of 5 rings per inch. This in turn can cause somewhat thin/fragile cell walls which will come apart, causing warp, cupping, and spits when exposed to the wide climate changes of hot/cold and wet/dry that occur in North America. Careful kiln drying “sets” the resin in many cell walls and pulls most of the free water out of the wood. In combination with the heavy “oil” content of Tigerwood, drying stabilizes the wood. Once carefully kiln dried, Tigerwood is very stable and does not shrink, expand, or ‘move’ much in service as a deck board. All TigerDeck® products are carefully kiln dried to ensure superior quality, durability, and strength. For further information on what Tigerwood is as well as the Tigerwood products TigerDeck® offers, feel free to continue to browse our site.

Want to use TigerDeck for your next project?

Buy Tigerdeck©
We use cookies to ensure that we give you the best experience on our website. If you continue to use this site we will assume that you are happy with it.AcceptPrivacy Policy